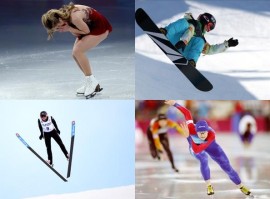 The Winter Olympic Games is an international sporting event that is held every 4 years in different locations around the globe. The recently concluded 2014 Winter Olympic Games were held in Sochi, Russia and featured the best competitors in different sports. Most of these competitors went for the prestigious Olympic gold medals awarded only to the best athletes in the sport. To prepare for the event, the athletes trained very hard and focused on their objectives so that they could perform at their optimum efficiency during the event.

The gold winners of the Sochi 2014 Winter Olympic Games are those athletes who trained the most and who visualised their win for the event. Winning athletes attended hypnotherapists in order to focus their visualisations clearer, thus reducing anxious feelings and remaining focused on a positive outcome.

These technique that athletes use to increase their competitive edge, improve mental alertness, increase confidence and are also used throughout the business world and individuals personal lives. Aside from invoking these characteristics, visualisation enables individuals to unconsciously review and remember their routines. By visualising an event, an outcome, or the routine, an individual will be able to control his moves and determine their placing.

The techniques of visualisation is not as easy as it seems. Hypnotherapy London  practices have proved that it requires utmost focus as well as a great deal of concentration.

In the session, the hypnotherapist will attempt to relax the individual and improve his or her emotional control by performing a series of methods. After the session, will feel more determined and more focused towards their goals. Most of the gold winners in life achieve this through knowing their outcome and believing they can achieve their outcome.